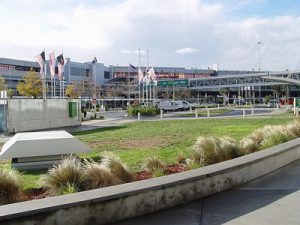 Melbourne airport (also known as Tullamarine airport) is the second busiest in Australia and serves as the sole international airport servicing the Melbourne metropolitan area. It has over 30 million international and domestic passengers every year and a corporate social responsibility scheme that looks to support sustainability within its community and the environment.

Hearing Loops are an essential part of their equality of access programme and the airport invested in new and upgrade loop technology during 2014.

Installed by CNG and supported by the international teams at Ampetronic and Hills SVL, the projects have been done in a timely and professional manner, ensuring that all clients and users at all levels are happy with the quality of work undertaken. The quality of the resulting hearing loop installations has been exceptional and they are now providing genuine benefit to travellers with hearing loss passing through Melbourne Airport.

Terminal 4 had the largest amount of work done as there were many areas requiring Assistive Listening Devices and permanent hearing loop installations. A check in area uses a very large and thin phased array design alongside a pair of MLD 9 amplifiers with a single array covering the square alcoves to provide full coverage.

Within the departure lounge an extremely large area was required to be covered. Two systems were designed, produced and installed to provide standard compliance throughout the entire departure lounge. The first design requiring four of our most powerful MLD9 units and the second requiring five MLD9s to drive current throughout the systems. Although a fairly simple phased array, the designs themselves follow the contours of the room and take into account concession areas and kiosks.

Six areas within Zone 3 & 4s Pier G sectors required auditory access for those with hearing loss. Two systems covered long and wide walkways where a single system has two parallel phased arrays which utilise the same MLD9 amplifier to power them. The six areas include seating spaces, walkways and kiosk areas. Each of the six systems use an Ampetronic MLD9 amplifier within a phased array to ensure that even due to large amounts of metal within the buildings infrastructure, the hearing loops still provide Standard Compliant coverage throughout.

All of the Nodes from 1-5 within Zones 1 & 2 use Ampetronic hearing loop systems to provide auditory access to important emergency and announcement information. Both Node 5 areas are very simple square shapes, both use an MLD7 unit. Nodes 1, 2 and 3 are all identical in shape and size, therefore all six areas over both zones utilise the same phased array design. All areas are very simple, but large spaces that each use an MLD7 amplifier. Nodes 4 were both slightly different as their size and shape more resembled that of a pentagon, the design therefore reflected these contours and again an MLD7 amplifier was used within each one of the nodes.

Terminal 2 was a separate installation and series of projects, again installed by the exceptional CNG and supported by the Ampetronic and Hills SVL teams. This included a terminal check-in area, the expanse itself was a huge and irregularly shaped space as it has a curvature to one side and resembles a semi-circle, this huge area is powered by a single MLD9 unit and the loop now provides coverage to the entire space.

Throughout the Arrivals Concourse, to minimise destructive work where possible, both Red and Green arrays inhabited the same saw cut in the floor, this ensured that installation could be done as quickly and as discretely as possible. The hearing loop is an extremely long thin phased array design that uses a single MLD9 unit.

Both bussing lobbies 1 & 2 have two narrow phased array systems running parallel and within close proximity to one another. The design and implementation therefore takes careful consideration of signal overspill to ensure that the loops do not interfere with each another. Both lobbies utilise two MLD9 amplifiers each to drive the systems. The Lounge spaces 1&2 were also very similar, with two more phased array systems running within close proximity, these were also very large spaces that again individually use a pair of MLD9 amplifiers.