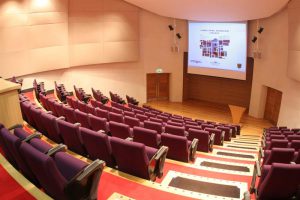 Magdalene College came into being in 1428 as a hostel for Benedictine monks coming from the Fenland to study Canon Law at Cambridge University. Over subsequent centuries, it has kept its focus on academic excellence, but has also moved with the times both in terms of technology and accessibility for the disabled. These two elements combine to give those users who are hearing impaired the same experience as everyone else via an Ampetronic induction loop system – a facility that the College demes an important investment.

The last few years have seen an extensive building programme at Cripps Court, a stand-alone newly built court constructed on land acquired by the College over the last 40 years. It boasts a sophisticated AV system for the brand new auditorium – the Sir Humphrey Cripps Theatre – plus a series of inter-connected seminar rooms in the original part of building that can play host to collegiate activity and be used by businesses as a conferencing facility.

Cambridge Audio-Visual was tasked with handling the AV requirements for the building, part of which is an extensive Ampetronic induction loop system to ensure both compliance with current legislation and fulfilment of the College’s desire to provide the most up-to-date facilities for all those using building.

The main auditorium is used as a teaching facility and a performance space for the College’s theatre group and music recitals – all acoustic – and has been designed with both these aspects in mind. It is equipped with an ambient omni-directional microphone, situated almost at ceiling level, which feeds the induction loop on a permanent basis. “That way, if someone just walks in to the room, anyone using the loop system will be able to hear what’s going on in the same way as everyone else can,” says Matthew Foster, technical manager for Cambridge AV. “When there is a lecture, etc, the presenter is mic’d and that source plus any programmed sound is mixed and fed to the loop system.”

The installation and system for the auditorium was fairly simple. The room resides below ground level, so there were no spill issues to cope with. “This allowed us to use a very simple perimeter loop that runs roughly down the stairs and across the front of the room, powered by an Ampetronic ILD9 amplifier with an Ampetronic MP221 pre amp,” he adds.

However, the seminar rooms are housed in the old part of the building and, being adjacent to each other, had to employ a design that took into consideration confidentiality and therefore spill issues.

“This is where Ampetronic’s design came in,” explains Matthew. “We’ve got a lot of experience installing induction loop systems. A lot are very straight forward, but others aren’t and I have to say, this is one of our most interesting. Because this is a conversion of an existing building, where we could put the loops was the issue. We knew we wanted to put them in the floor, but the next problem was, because of the flooring that was going back down, there was no sub-floor to lay tape and we had to go back to using wire.”

Cambridge AV was involved right from the very start, with their first conversations for the project being in 2002, which was a very nice, and fortunate, situation to be in given the complexity of the construction schedule.

“We took the design that came from Ampetronic, with all its close tolerances, and drilled holes everywhere that was needed through solid oak joists. We had a long liaison with the electrical and main contractors about how that was going to work. The biggest issue wasn’t laying the loops themselves, it was making sure that we were in here at the right time and, that once we’d been in, everything stayed protected. Once the floor went back down, it would mean taking the whole thing up again if any breaks became apparent.”

The systems used in the seminar rooms are phased array systems, where two loop systems are superimposed running audio signals that are out of phase with each other. Ampetronic phase shift technology and Ampetronic proprietary design techniques make this type of loop system possible. Each room uses two Ampetronic ILD252 amplifiers linked by one Ampetronic SP5 phase shifter. The loops are fed by omin-directional boundary microphones and also have the capacity to allow additional hand held microphones to be connected. The largest of five rooms, Seminar Room 3, has it’s own loop system fed by a further two ILD252 amplifiers and an SP5 Phaser unit.

“Our AV facilities have been carefully planned and designed to the latest specifications as an all-inclusive package,” concludes Dr Mark Billinge, development director for the College. “We have tried to make sure that we have covered every issue – and have also left ourselves spare capacity should we wish to add to the equipment in the future – and the loop system is a very important part of this.”