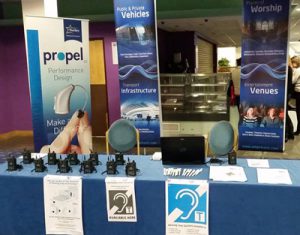 The British Academy of Audiology (BAA) is a world renowned professional body for audiologists that frequently holds conferences and continued professional development workshops and training.  To quote the BAA, they are the “largest association of professionals in hearing and balance in the UK”.

The BAA Conference is their annual meeting where they hold talks, seminars, workshops and even an industry tradeshow that hosts hearing industry attendees. The BAA decided that it was essential to provide greater assistive listening coverage for attendees in the form of hearing loops, however, as no loop service was available at the venue they decided to contact Ampetronic and request sponsorship in the form of temporary loop installations, giving our team the opportunity to hold a talk.

The Bournemouth International Centre is owned by BH Live whom run exhibitions, conferences, concerts and entertainment events. The centre itself is a UK’s arena and can hold up to 10,000 people, it has seen many famous people pass through its doors including Katy Perry, Michael McIntyre, Gary Barlow and Bob Dylan.

The largest of the six rooms, Solent hall utilises a phased array design providing coverage to the entire front seating area, which consisted of around 300 seats being covered with a single hearing loop. Feedback was excellent from the users as this particular system was used frequently as it was the main conference hall. The loop used an MLD9 amplifier to drive current around the system.

A smaller side room that was to be used for smaller interactive workshops and discussions. As this was under one of the other rooms we wanted to consider overspill into the above room (bay view), as both rooms were mirrored on top of one another it was decided that we could cover the front of both of the rooms with a low spill phased array design. Uses an MLD7 amplifier.

This room is situated directly above the Solent lounge and therefore had to carefully consider spill from the systems within both rooms. A long room with lots of metal raised access flooring meant that a phased array system powered by an MLD7 amplifier was necessary in order to achieve standard compliance. The room was used for numerous lectures, discussions and classes through-out the two day period, this gave equal access to those visitors with hearing loss and those audiologists whom rented a loop receiver to test and try the technology.

Tregonwell Hall was the second largest of the six hearing loops. The system comprised of three separate areas all ran by the same MLD9 amplifier with two loops set-up in phased array. The loops covered two side seating areas and a lowered ‘pit’ of seating. The use of Printed Warning Tape helped to show attendees with hearing loss which seats and areas where covered by the induction loop.

A small seminar suite used for smaller, more intimate, audiology talks by guest speakers. This system utilised a very small phased array, this design was used so that magnetic signal didn’t overspill far into the neighbouring Tregonwell Hall and interfere with the much larger hearing loop installation. A single MLD5 amplifier was used to power the system.

This lounge was a relatively large space as although it wasn’t a wide area it was a very long space with two loops running in phased array, this ensured that the front half of the tables and chairs were covered by the hearing loop system. Appropriate signage and the use of printed warning tape on the floor aloud users to see and understand where the loop was accessible. An MLD7 amplifier was used here to provide power to the system.

The reaction to all of the installed hearing loops has been tremendous and the BAA board of directors gave special praise to the Ampetronic team for work on the systems. Audiologists were even given the opportunity to test and try the hearing loops as part of an ongoing technological demonstration where they could borrow ILR3+ receivers in order to listen to the loop in the same way a hearing aid user would.