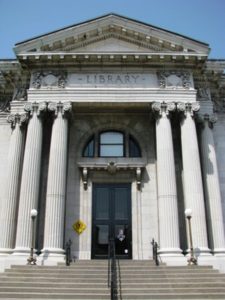 The Louisville Free Public Library has history dating all the way back to 1906 when it was first designed and constructed by New York City architects Tachau and Pilcher. The newer Contemporary North Building was built in 1969 and gave over twice as much space to the main library. Louisville Free Public Library now services over 400,000 people per year. To ensure a better user experience and also that the library adheres to the Americans with Disabilities Act of 1990 Mayor Fischer and Library Director Greg Buthod decided that Assistive Listening Devices such as Ampetronic hearing loop technology was essential in providing equal access for people with hearing loss. The library has been seeking new ways to provide value to their users from the beginning and the Mayor of Louisville, Greg Fischer stated in this article that “Craig and his team here at the library are always pushing the edge to see how we can make our user experience even more enjoyable”.

A Low Spill Phased Array system was essential to prevent overspill into other areas and provide an even magnetic field strength across the listening area, although there is only one loop system currently fitted, low spill was seen as essential so that hearing loops could be installed into adjacent rooms if needed at later dates. To ensure standard compliance two ILD500 units were used. Jon Hoskin, Ampetronic’s engineer explains “Thanks to comprehensive design and simulation we were able to push the ILD500 to the limit of its capability. The area that needed covering was large and produced a fair amount of metal loss due to the buildings construction, these were again over come through meticulous design and simulation.”

Precise implementation of the design was needed throughout the installation process to ensure that the hearing loop performed as was designed. Mike Dewees of Acoustical Audio Designs expertly and flawlessly installed the loop, subsequently it has been providing much value to the community it was designed for and Paula Esterle from The Hearing Loss Association of America’s (HLAA) Kentucky Chapter has said that “hopefully it will lead the way for churches and other venues to install this affordable technology”.