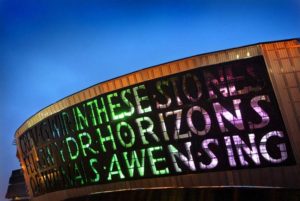 The Wales Millennium Centre (WMC), nestling at the water’s edge of Cardiff Bay, describes itself as “the most exciting cultural initiative happening in Europe today”. First sight of this architecturally stunning building proves that this is no hollow boast. Design is by local architects, Percy Thomas, and whilst the exterior takes inspiration from the strata of the cliffs of South Wales, the interior is full of sweeping lines of Welsh hardwoods and iron columns.

Officially opened at the end of 2004, WMC plays host to international musicals, opera, ballet and dance and is home to seven diverse and exciting cultural organisations. Attention to detail throughout the build has been meticulous. Thus, sound and lighting contractor, Stage Electrics, called upon the expertise and equipment of Ampetronic for an induction loop system to allow those with hearing disability to access audio through a substantial portion of the facility.

The building contains an extensive amount of structural steel – 5,000 tonnes to be precise – which can absorb most of the energy from an induction loop system. In fact, in the Donald Gordon Theatre, one of the main areas to be covered, the concrete floor in which the loop sits is supported on steel sheets. Additionally, loops are installed on multiple levels to ensure that the majority of the seating has induction loop coverage. This means that the loop system needs careful design to counter both these problems.

“Ampetronic performed a site survey at Easter of 2003,” says Stage Electrics’ Jonathan Porter Goff. “We’d worked with them before on The Lighthouse in Poole, so we knew that we would get tremendous support from them. Since this is by far the most complicated system we’ve ever installed, we were very pleased to be working with people we trust.”

The theatre can seat 1848 people, with a further 48 standing places, on three levels. “There is induction loop coverage everywhere except the side slips and the seating on the orchestra pit lift,” explains Ampetronic system designer, Richard Brooks. “As well as the problem with the structural steel, installing loops on multiple levels (stalls and two circles) is challenging, as the systems can negatively interact with each other.

“Our magnetic simulation software, designed in-house, was able to simulate the interaction between the levels by plotting the magnetic field three-dimensionally. The loop layout was then designed to minimise this interaction, whilst Ampetronic’s ‘Phased Array’ approach to loop design means that the loss caused by the metal could be minimised. To cope with large areas, Ampetronic’s ILC5 combiner system allows multiple loop amplifiers to be used to drive one loop. In addition to the combiner units, 10 ILD9 loop drivers and three SP5 phase shift units were used for the theatre.”

Other areas of the complex where Ampetronic loop systems are installed include the Studio, the Urdd Hall and the studios of the Diversions Dance Company.

There is movable retractable bleacher seating in the Studio, plus floor level seating for 207-253. “We encountered the same challenge here as in the main theatre as far as metal goes,” continues Brooks. “But we also had to design a loop layout that retracts with the bleacher seating and, when the seating is folded back and not in use, still have the entire floor area covered.

“We used the same approach for metal content and a system for installing the bleacher loops in flexible conduit was developed. This prevented the loop wires from snagging when the seating was retracted. When the entire floor area is in use, a change over switch is used to turn off the bleacher system whilst switching in additional floor level loops.”

One of the dance studios has both bleacher and floor level loops too and the same solution was applied. This space is close to another dance studio and The Urdd Hall, meaning that the loops systems need to operate simultaneously with different programme signals. A simple perimeter loop would spill signal for up to three times the size of the room, so Ampetronic’s low spill loop design approach was used for this area, configured with their magnetic simulation software, which attenuates the signal by at least 40 dB into the adjacent room. This is the magnetic equivalent of an acoustic partition between rooms.

“Induction loops aren’t a visible part of the workings of the WMC,” concludes Martin Hunt. “But it’s tremendously important to us that we provide not just any solution that means we can tick the right boxes for the DDA, but a solution that works well for our visitors with hearing disability. Ampetronic has produced a system that works incredibly well, especially given the complicated nature of our requirements.”