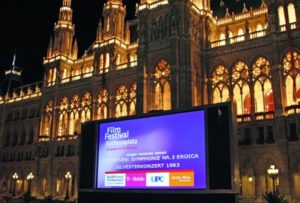 For over a decade, the city of Vienna has played host to a free Music and Film Festival. There are few better places one could think of to take in the late night delights of open-air screenings of opera, dance and concert films than the square in front of Vienna’s famous Rathaus, or City Hall.

The temporary installation of a IEC60118-4Standard compliant induction loop system by installers ACS Akustik ensured that hard of hearing people could have equal access to the same audio experience as other members of the audience. With over 3000 visitors and a long running time (12 July to 14 September) the installation of a temporary induction loop had to be extremely reliable.

ACS Akustik’s Alfred Sturma gives some very interesting insight. The induction loop had to be placed 100 metres away from the drivers, this caused power loss issues with the feed cable. Fortunately installers ACS Akustik knew that Ampetronic equipment is extremely powerful, it was therefore more than capable of running the long cable length in the perimeter loop. Alfred trusts the quality of Ampetronic equipment and said that “Previously, we used an Ampetronic ILD9 amplifier, with very good results. This year, we’re using the new ILD1000G to cope with the additional requirements of the long cable length” (as quoted in 2008).