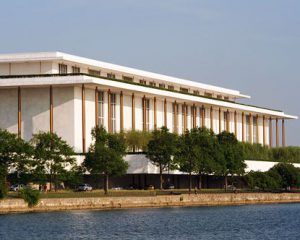 The John F. Kennedy Center for the Performing Arts is a center that facilitates and supports many types of creative expression in the form of dance, music and theatre.

Hearing loop systems were temporarily installed by Ampetronic and Assistive Audio as part of a joint annual conference for the Hearing Loss Association of America (HLAA) and the second International Hearing Loops conference, benefiting also the American Academy of Audiology. The large installation covered the conference room, ballroom and conventional hall and was part of a much wider initiative for the HLAA – and the American Academy of Audiology.

As part of the conference there was a performance of the Broadway musical Wicked, the well-known musical composer Richard Einhorn (who became hearing impaired after a viral infection) was in attendance. This was his first ever experience of a hearing loop and it evoked a major emotional response “There I was at ‘Wicked’ weeping uncontrollably — and I don’t even like musicals”. The system used Ampetronic induction loop drivers and delivered “perfectly clear, perfectly clean and incredibly rich” sound. To read more about Einhorn’s intense audio experience, view the New York Times article HERE. Richard Einhorn has since become one of the most significant and prominent advocates of hearing loop technology in the United States.

A survey conducted after the event by Zoomerang revealed that, of those that were using the induction loop during the show 95% had either a positive or a very positive response and that 28% of those using the loop were experiencing this technology for the first time.

Here are some of the comments gathered during the survey: