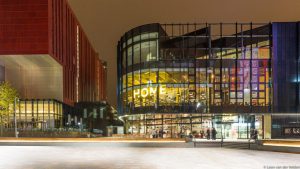 HOME is a centre for international contemporary art, theatre and film in Manchester; it represents the merger of two Manchester-based arts organisations: Cornerhouse and the Library Theatre Company. HOME opened in April 2015 as part of the ground-breaking First Street development. Stretching out over 20 acres of city centre heartland, First Street Manchester is specifically designed to connect artistic creativity with business and enterprise and is part of the development of a creative quarter in Manchester.

HOME has two performance venues, a 500-seat theatre and 150-seat flexible studio space. It also has five cinema screens, gallery space to display contemporary art, a cafe bar and restaurant. The inclusion of assistive listening systems at the very outset, was key to the development of the site. Because of the proximity of each venue within the HOME complex, control of audio overspill was key and also presented the biggest challenge.

The assistive listening solution in the 500-seat theatre actually consisted of three, separately designed Hearing Loop systems; one system for each level of the theatre. An MLD7 MultiLoop driver was used on the lower level, with a further MLD5 installed on each of the further two levels. The theatre systems were co-ordinated with Stage Electrics, who were engaged to do the audio and lighting installs; together we made sure the correct audio feeds were allowed for. Debbie Bell, Venue Manager at HOME added:

“The theatre at HOME has a truly international focus. We are a home for UK premieres of foreign language plays and invite visiting companies from around the world to stage productions in our theatre. It was therefore essential that we incorporated the best assistive listening technology at the outset of the project and we knew that Ampetronic would supply the best Hearing Loop solutions and systems to meet the varied needs of the site.”

Faced with the challenges arising from five separate cinemas under one roof, the Ampetronic team set about designing systems that were not simply Standard compliant. System Design Engineer Chris Dale explained:

“The biggest engineering obstacle in this project was controlling overspill to avoid crosstalk between different cinema screens. This was especially challenging as the looped areas were spread across multiple floors. With adjacent systems we would normally aim for below -32dB of overspill, in line with the IEC 60118-4 standard, however with cinemas even a small amount of crosstalk could cause a big distraction or even be inappropriate if for example there was an age restricted film showing in the next screen. Because of this, we aimed for inaudible rather than standard compliant, with the majority of systems measuring -42dB or below of overspill which was inaudible with a speech track when commissioned.”

The cinema installations were co-ordinated with Sound Associates, who did the AV install to provide a suitable audio mix down from their sound systems, which was also fed to a Sony Entertainment Access Glasses system, ensuring that the two assistive systems worked successfully side by side.

Another big challenge for the Ampetronic team was the high metal content throughout the site. We went to the site during the early stages of the project and conducted tests for both metal loss and overspill, to make sure the equipment we’d specified met the actual requirements of the site. Our System Design Engineer, Chris Dale added:

“We got involved very early on and were constantly liaising with [our installation client’s] Protec’s project manager, to overcome any obstacles that arose during the planning and install up until the commissioning, which we went and carried out to make sure the systems were all working as per the designs. There were a couple of design tweaks during discussion with Protec and the seating company to make sure the loop cable was designed to fit around the seat fixings in all the spaces.” 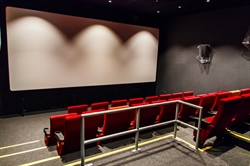 Ampetronic provided both the designs and equipment for HOME and our client Protec Fire Detection plc undertook the installation. The Ampetronic design was implemented perfectly by Protec, and the system adheres to the internationally recognised IEC60118-4 Standard.