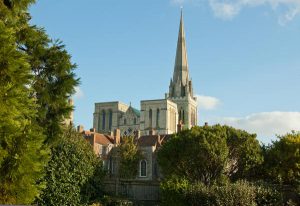 Chichester cathedral has a rich and diverse history with construction on the cathedral starting in 1076 it has survived two fires and become known as a testimonial to architectural character in the south coast of the United Kingdom. Chichester cathedral had originally decided to provide equal access the hard of hearing members of its congregation back in 1990 (back when it was not as popular! And the Equality Act of 2010 was non-existent). They then decided that after the deterioration of some of the audio equipment that a full refurbishment was necessary, this included the testing and potential replacement of Ampetronic induction loop technology.

Contractor RG Jones where given the task of upgrading and refurbishing the entire audio of Chichester cathedral. “We inspected the equipment, tested it to check functionality and found it to be working well. Having also investigated with Ampetronic the likely areas that may cause problems, all were agreed that there was absolutely no basis for replacing the ILD9s or ILC5.” The system was originally installed 17 years prior to this inspection and one would expect some sort of deterioration of quality, but no, it was decided that the original Ampetronic equipment was in perfect working order and in fact good for “at least another ten years!”.

Ampetronic induction loop technology has been very well received and integrated into the cathedral’s audio equipment and the old ILD9 & ILC5 units are now housed in a new and upgraded rack with more up-to-date audio equipment.