The history of hearing loops

1700-193,7 Although such illustrious names as Franklin, Faraday and Tesla have been experimenting with electromagnetic fields (the core scientific principle behind the operation of a hearing loop) as early as the 1700s, it was not until 1937, when Joseph Poliakoff filed for a patent in the UK on an Induction Loop Hearing… find out more...

The history of hearing loops 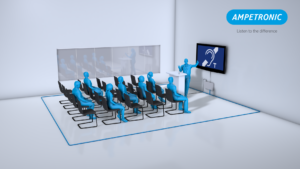 Although such illustrious names as Franklin, Faraday and Tesla have been experimenting with electromagnetic fields (the core scientific principle behind the operation of a hearing loop) as early as the 1700s, it was not until 1937, when Joseph Poliakoff filed for a patent in the UK on an Induction Loop Hearing Assistance System featuring what was called a telephone coi,l that hearing loop technology really started to be developed.

In early designs such as this, the telephone coil was designed to pick up the magnetic field produced by a telephone handset speaker coil, which could then be converted back to an audio signal. The advantage of this for the hard of hearing was that it picked up only the audio signal from telephone and none of the acoustical distortion, making the speakers voice more intelligible, just as is still the case today. The telephone coil name would later be shortened to “Telecoil” or “T-Coil”.

This patent was picked up by the UKs Multitone Electric Company in 1938 who then brought to market what is thought to be the first Telecoil enabled hearing aid, the Multitone VPM, which fitted into a user’s top pocket (Vest Pocket Model) and was fitted with external earphones.

The implications and benefits for combining an induction loop, driven by an audio amplifier, that completely surrounded a user with a Telecoil enabled hearing aids was obvious. Experimentation with systems was particularly prevalent in the late 60s and 70s in Scandinavia and were fitted into places of worship and schools.

In the early 1970s the first behind the ear hearing aids featuring Telecoils were invented, and in 1974 the UKs National Health Service began prescribing the technology to hearing impaired patients, many of whom received the hearing aids free of charge. This encouraged the development of amplifier technology that could make a more reliable and powerful magnetic field that covered larger areas, and would work in modern buildings with metal construction that weakens and distorts the magnetic field produced.

In 1987 Ampetronic was established and began to rapidly develop the technology in the UK. Ampetronic developed the first phased array system (multiple induction loops operating together out of phase so as not to cause interference) capable of covering large areas in modern buildings with metal construction in 1991. In 1995 Ampetronic introduced metal loss control systems to further address the problem.

During 2005 Ampetronic developed the first computer aided design software that made the accurate modelling of the magnetic field produced by different induction loop layouts possible. This new technology made it possible to design a system for virtually any environment and the company began to increase its activities in Europe and expanded globally, entering the US market in 1999.

Ampetronic remain the World's premier induction loop systems manufacturer and lead the market with innovative solutions, such as the introduction of systems capable of functioning in high metal transport applications like trains and buses (this has been implemented in many applications including The London Underground, Intrepid, LUAS Trains). The development and launch of, first Loopworks Measure then Loopworks Design tools, by Ampetronic has lead the way in hearing loop specification, design and measurement and offers access to over 30 years of hearing loop knowledge through a web accessible portal. Products such as the flagship D-series also push the boundaries of what is possible with a hearing loop driver.

For more information contact our friendly and knowledgeable team on +44 (0) 1636 610062 or email sales@ampetronic.com.