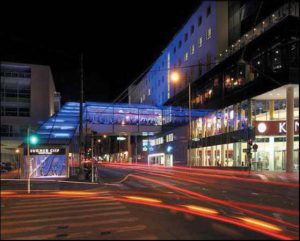 Lugner City is the brainchild of Austrian businessman Richard Lugner, whose interests range from construction to the organisation of Vienna’s annual opera ball. A hugely influential and occasionally controversial figure, Lugner has built a hugely successful,multi-level shopping mall in a key city-centre location, bringing 21st-century sales and marketing methods to the Austrian capital’s conservative retail culture. The latest addition to the mall is Lugner Kino City, an 11-screen multiplex cinema which can be accessed directly from the shopping centre, from the street, or from a dedicated bridge link to the nearest suburban train station. Explaining his rationale for adding the cinema, Lugner says: “It is illegal for shopping centres to open on Sundays in Austria, so we needed a way of bringing revenue into the venue seven days a week. But I was keen that this wasn’t just another multiplex, so I got involved personally in the design of the screens and in their marketing approach.”

The total capacity of Lugner Kino City is 1,840 –plenty of ‘bums on seats’ to keep the cash tills ringing every day of the week. But the proprietor’s courage and flair for innovation can be seen in the way the screens area configured. Two of them, forexample, are branded as ‘Studiokino’ – small, intimate rooms where visitors have larger-than-average seats with tables next to them on which to place their drinks and popcorn. There is also an exclusive ‘Lugner Lounge’ where, for an additional payment, visitors can relax before and after a movie with snacks and drinks.

The Lugner approach is inclusive as well as exclusive, however. Inspired by his late mother – who during his childhood used to turn her hearing-aid off when he was being naughty – the cinema owner has sought to appeal to hearing-impaired customers by insisting that all 11 of his multiplex screens are equipped induction loops. As well as broadening the venue’s potential visitor base, this has the added bonus of ensuring that Lugner Kino City complies fully with the requirements of the European Union’s new Disability Discrimination Act .For the design and installation of the cinema’s induction loops, Lugner turned to Vienna-based specialist Alfred Sturma, whose company ACS-Akustik has been equipping venues with such systems for many years. Sturma in turn used induction-loop amplifiers and processors from the UKbased manufacturer Ampetronic, for whom he is the Austrian distributor. “The hearing-impaired have two main problems with modern movie soundtracks,” says Sturma. “The first is that they are too loud, and the second is that a lot of special effects are in the surround channels, which you cannot reproduce in an induction loop.” Sturma’s solution to this problem is to use the ‘HI’ output which is located on every Dolby professional surround-sound processor.“This is a speech-optimised output,” explains Sturma. “The main left and right channels are reduced in level by 3dB, the centre channel is boosted by the same amount, and there are no rear channels. In all the rooms of the Lugner Kino City, this is the output we used to feed the Ampetronic induction loop. ”Summing up the role that induction-loop technology has played in the development of his cinema, Lugner comments: I’ve never seen the hearing-impaired as invalids, but this new Act is a good thing because it forces us to consider the needs of these people, in the same way that we have been providing wheelchair access for those with physical disabilities .Being able to tune into a film soundtrack using a hearing aid transforms the movie going experience for the hearing-impaired.”