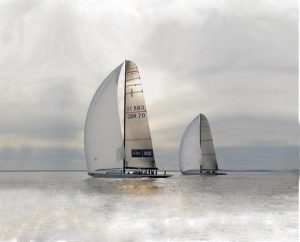 The prestigious America’s cup takes place every 4 years. The teams know that the difference between winning and losing is a matter of seconds. In their two years of preparation, they constantly pushed themselves and their equipment. Ampetronic, sponsors of the GBR Challenge provided an innovative solution. Based on induction loop technology and featuring the ILD122 loop driver, Ampetronic developed a custom belt pack microphone system based on advanced loop technology to allow the skipper and crew to communicate on board the yacht.

Communication plays a big part in team racing success. The rules of the America’s cup are very strict and the use of normal radio transmission is prohibited. Shouting commands over the noise of the wind and waves is futile. A means of communication that was both wireless and adhered to the rules needed to be developed. The challenges of using hearing aids in such an environment varies, the salt-spray from the ocean for instance can damage the device and although there are many types of waterproof hearing aids a sea worthy variation was difficult to find. Another issue with using hearing aids in a competitive and volatile environment is that the retention of the device in the ear is insecure. After an extensive amount of research Ampetronic were able to locate an excellent ‘in the ear’ hearing aid, made by German industry leading manufacturer Hansaton, the device not only met all requirements for the project, it also had a very easy to use interface and advanced battery technology.

The final challenge that up until now no-one else had been able to resolve: how do we allow the microphone users the freedom to move about? Every system using induction loop technology has been constrained by the use of fixed microphones. This would have been a serious constriction under race conditions. Ampetronic have been able to resolve this issue by significantly extending the capabilities of a technology similar to induction loops, known as Carrier Induction Technology. The transmission is still magnetic, but the signal is encoded on a low frequency carrier. This development enabled speech for 3 people whilst still having freedom of movement, this helped to enhance communication whilst decreasing stress levels during the race, producing a unified and more focused team.