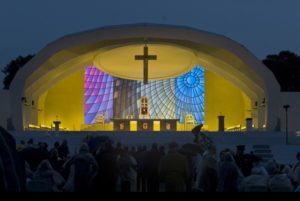 The beautification of Cardinal John Henry Newman was held at an open air mass and was one of the heights of Pope Benedict XVI’s visit to the UK, held in the well-known Cofton Park in Birmingham.

This was by far the largest temporary induction loop system ever designed by Ampetronic and was a major logistical challenge. With over 52,000 pilgrims attending the event the production company WRG, the Home Office and the audio contractor Wigwam Acoustics all agreed that the induction loop coverage should be extensive and consistent, as it was likely that a large amount of elderly people would be attending the event.

Phased Array systems were used throughout the project to compensate for anticipated metal related signal loss due to large amounts of steel scaffolding. Three induction loop systems were created to give the most comprehensive coverage as was possible. The main area of 14,300m2and the two wheel chair platforms 950m2 and 580m2 used a total of thirteen ILD1000G phased array kits and 4 SP5 Phase shift units.

This project was entirely unique and not without its fair share of challenges, James Bottrill from Ampetronic explains “We had to come up with a solution that would work, but which could also be installed within a tight timescale, the client being under pressure to provide access for the hard of hearing whilst not compromising the rest of the build. Installation had to fit in with the other contractors on site and the construction of the facilities for the Mass were necessarily timetabled not to take up large areas of one of Birmingham’s major green spaces for longer than was necessary.  We ended up using the rather unusual solution for laying copper loop cable; by creating a small trench in the turf with a quad bike with a mini trenching tool attached we were able to cover the ground very quickly and then spool the cable into the trenches.”

We were very happy with the finished product as James explains “We were very pleased that Wigwam asked us to get involved and that we were able to contribute to the enjoyment of this unique event for so many people.”