Have you ever wondered what these signs mean? There is often some degree of confusion around what Assistive Listening signs mean, and if you don’t have a hearing loss, it’s possible that they’ve been all around you for years without even being noticed. Assistive Listening Devices such as Hearing loops… find out more...

Have you ever wondered what these signs mean?

There is often some degree of confusion around what Assistive Listening signs mean, and if you don’t have a hearing loss, it’s possible that they’ve been all around you for years without even being noticed.

Assistive Listening Devices such as Hearing loops have a rich and diverse history dating back over 75 years. The technology and subsequent signage has developed and changed over time, this has resulted in many different variations, some with different connotations.

Because assistive listening signals are inaudible without a receiver and, in the case of hearing loops, the technology that produces the signal is hidden from view, signage has become a critical component in conveying the fact that there is an assistive listening service available to the user, this is why I would like to take the time to briefly explain the subtle differences between signage.

Originally the internationally recognised sign was a telephone with a coil to the left and a ‘T’ to the right, this was common place for many years and systems that have not needed to be replaced or developed may still use this same signage. This sign originally referred to the Telephone setting on a hearing aid (now generally referred to as the T, or Telecoil setting) which would be used in old systems to help hearing aid users connect to telephone speakers. With the development of newer Assistive Listening Devices manufacturers also decided that a more homogenous sign design was needed to help with the international recognition of the systems.

The most common type of signage many users will see today is the renowned ear with a line through it (as pictured below). This is to indicate that there is an Assistive Listening Device of some description in the area, this could be either an FM, Hearing Loop (AFIL) or an Infra-Red System. This has been common place for many years and has been widely accepted as the most recognisable replacement of the original design.

If this sign is accompanied by a ‘T’ symbol then it typically means that an Audio Induction Loop (AFIL) or Hearing Loop (as it if more commonly referred too) is in place, the user can then turn their hearing aid to the ‘T’ position and enjoy an instant connection to the audio signal that is being transmitted. It is only a subtle difference in the sign, but one that has a profound impact on the users experience. Many modern signs also include Braille to help assist those who have sight and hearing loss and will therefore be in a very open and easily seen location. 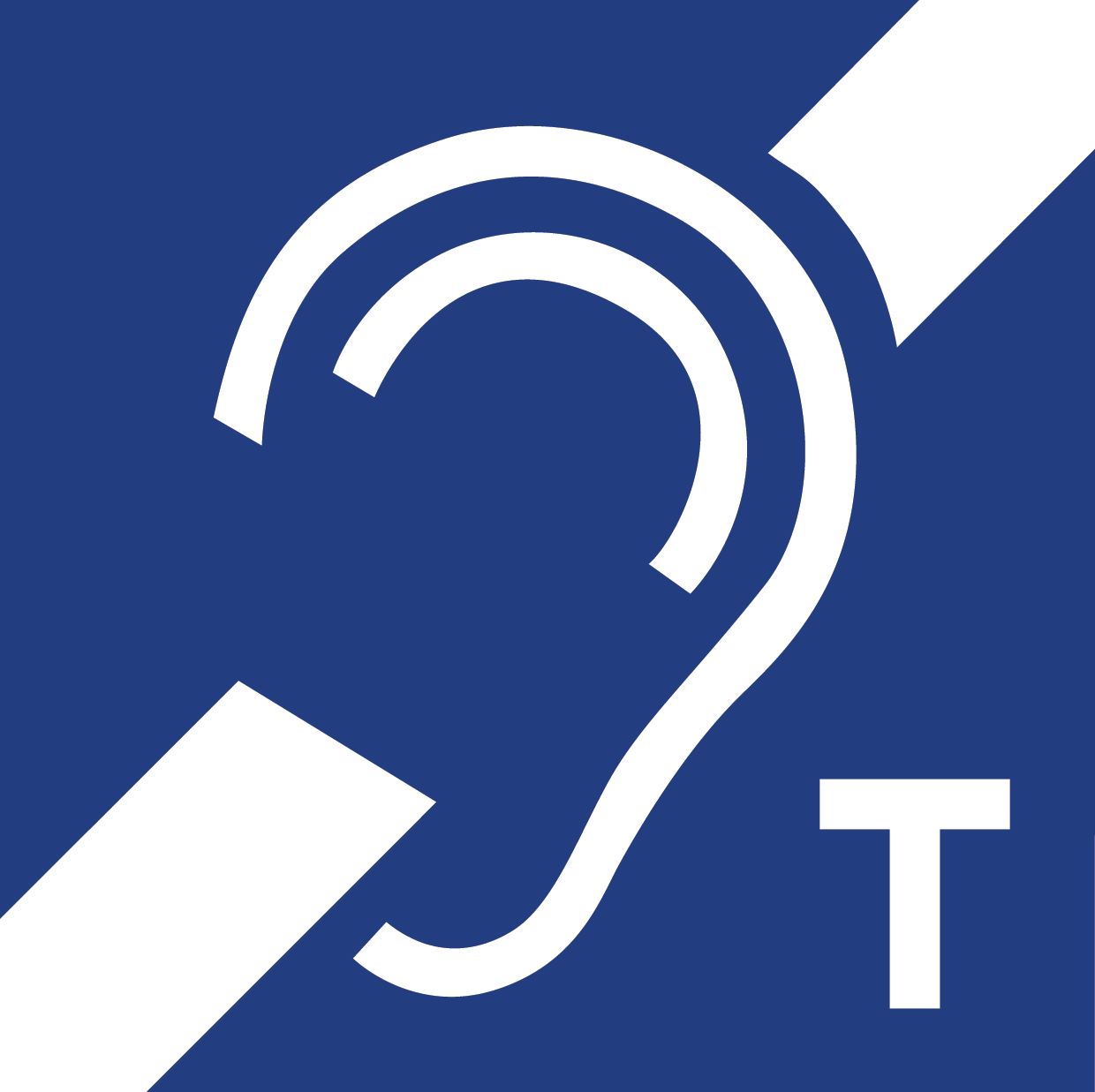 The signs themselves can come in an array of bright colours as different manufactures utilise different colours to differentiate themselves. Some of the most common variations that you will see are blue, green, yellow, black and brown. Blue is the most commonly recognised colour, this is because it widely accepted in Europe as the colour of informational signs and is also more evident to the people with visual impairments.

The signage should always be in at any entry point to an area with an Assistive Listening solution and in a very clear position within the area, regardless of colour.

There are also multiple variations of the ear and line design, for instance, an ear sign that has dotted lines instead of a singular line through the ear can usually be associated with an FM Assistive Listening Device. These variations have mainly been produced through aesthetic preference associated with different manufacturers of IR and FM systems, subsequently they can sometimes follow FM or IR installations. Manufacturers have however been working towards standardising the following image to specifically refer to FM systems only and this is becoming widely recognised by the general public.

If however you see an ear sign that has curvy horizontal lines this is typically associated with IR systems only. The standardisation of signage is an ongoing venture and the sign has also be known to accompany the occasional FM system, if you are unsure as to which system is installed, do not be afraid to ask staff at the facility - you have the right to equal auditory access.

New versions of standards are constantly being created, updated and developed upon, this of course impacts signage design. Countries such as Australia are starting to specify their own standards and are looking at a creating a set of the loop logos that will be the same across all manufacturers. This will greatly improve the awareness of systems and subsequently their functionality for the end user.

If you would like help in choosing an appropriate type of Assistive Listening Device you can weigh up the pros and cons here on our ALD page. Ampetronic have been the world’s leading hearing loop manufacturer for over 25 years and have been proud to provide a genuine benefit to those with hearing loss. If you would like to learn more about hearing loop technology, its implications and its importance then please contact Ampetronic on +44 1636 610062